There has been a movement afoot in literature to focus on one commodity, and make a book of it. People have written about salt, wine, and chocolate. I wondered if anyone has written about what the great state of Idaho is known for, namely, the potato.
How did this come to pass? How is it that when a person from Idaho travels, he or she is inevitably asked about potatoes. It turns out that Idaho was a trailblazer in this regard when in 1937 the Idaho Potato Commission was founded. This body, funded by a tax paid by potato farmers, set out to advertise on radio and later television, to create a brand identity from a single crop. With a seal fashioned, the customers were encouraged to look for that mark when purchasing what was to become our famous potatoes. Lots of other states grow the crop, but the affection and identity formed by the commission created a market for thirteen billion pounds of spuds, one- third of all those sold in the United States. 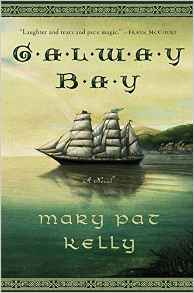 On a past St. Patrick’s Day, a dear friend by the name of Mary, told me about a book she had just read by Mary Pat Kelly. Entitled, Galway Bay, the novel is an actual oral history passed down from one generation to the next. Told primarily through the women, it is the tale of one immigrant family and their travails from Ireland to Chicago. While it is not about the potato famine, called An Gorda Mor in Gaelic, it is the great catalyst of the tale.

“They tried to kill us, but we didn’t die.” The thread of this story, handed down through the ages, is one of incredible hardship and then survival.

When I was in school in Toronto, I recall the day the teacher told us that the famine was caused by a lazy population who stupidly lived on one crop because they could not be bothered to grow anything else.

“When that crop suffered a blight they starved,” she told us, with the implication that they should have known better hanging in the air.

I remember looking out the window, trying to sift through her facts with what I knew about my own family, all of whom are avid gardeners and farmers. At home, I asked if the story were true and heard that food had been exported to England all through those dark days. Imagine having to take the harvest to market, load a ship and return home to a house of desperate want. As the “croppies” were only given a scant bit of land to cultivate for private use, the “pratties” gave the highest yield and provided the greatest nourishment.
These are the facts: 750,000 were confirmed dead of starvation. Bearing in mind that many more died in the coffin ships landing in Montreal and Boston, this would be a severe underestimation. Without the hospitals, or the manpower necessary to deal with the influx, the sick passengers arriving in Quebec were put on an island in the St. Lawrence and left exposed to the elements. Promised, land, cash and food upon arrival, they arrived to find nothing and no way home. The bit of land they left behind on the dear, old sod had been exchanged for the price of their passage. Cecil Woodham Smith reported that during the famine years, 257,000 sheep were exported to England from lands held by absentee landlords. 480,827 swine went over as well as 186,483 head of cattle. Not even mentioning other crops, the picture is clear.
There is a happy ending to this tale. The Irish flourished in both the United States and Canada. Reading Galway Bay prompted me to look up the history of my maternal grandmother, Rose Cahill Gaudette. One of ten children in her family, I learned that her mother was the oldest in a family of ten. Examining records found on Ancestry.com, my blood ran cold when I saw the date. In 1848, Thomas Cahill arrived in Montreal. Famine. Coffin ship. Most of the passengers died, and their bodies were tossed over. Of the living, it was decided to send the Irish on a barge to Toronto. The sun blazed and the fair skins burned. Once again they were placed on an island off shore. Yet the good people of the city rowed out in small boats and volunteered to tend the sick, risking their own lives in the process. The Cahills made their way to the gorgeous Ottawa valley, carved a life in the wilderness, and flourished.

From one noun a great story may unfold.