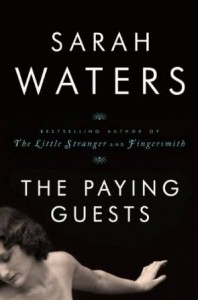 Like most readers, if I thoroughly enjoy an author’s work, I am usually keen to read their subsequent novels. Because I was engrossed in The Little Stranger, which I read it a few years ago, it was with that particular anticipatory glee that I cracked open The Paying Guests. Sarah Waters writes comfortable, homey stories with very adept description making the reader at home in the parlor with her characters. You almost feel as if it is you who dropped round for tea, or came clamoring to the front doorstep having just heard the news- whatever that news may be. She writes of families and groups where you have the odd sensation of feeling you are one of them. It seems so natural and so friendly; I would not hasten to call it a device. Is it not the goal of any story to draw you in? This she manages with alarming dexterity. At first, a sleepy house in a fine neighborhood inhabited by a widow and her unmarried daughter would not inspire most readers to pick this up, unless you happen to be a certain type who absolutely loves this kind of cozy British drama. That was all the impetus I needed.

It would take more than tea and biscuits to keep the story going. When we learn that the two women are to take in boarders, I was prepared to read about all sorts of petty conflicts, judgments and disapproval cropping up everywhere, but that alone would not have been enough either. What keeps the story moving very quickly through 564 pages, is a knack for getting the reader more and more deeply involved. In The Little Stranger, the author had the same effect on me. The tale got darker, the characters in much greater peril, the family in more trouble, until I simply had to know what had brought them so far off course. In both books, it is as if the reader starts at the top of a staircase and then just keeps going consistently down, until you fear for these characters so much that you cannot close the book and go to sleep. They all set out innocently enough, with good food in their bellies, good clothes on their backs, good values and intentions all in place, their standing in good order, but piece by piece, it starts to go south and then keeps right on going. You begin to fear that they are associating with the wrong sort, as they would say in England, and that they are in danger of getting in over their heads. Disgrace, scandal, and being the object of gossip, all being a fate to be avoided at all costs, seems to dog Waters’ characters from start to finish. Reading this book brought me back to the days when I would sit in my grandmother’s living room hearing her recount various stories of people she had known, who seemingly through no fault of their own, had gotten mixed up with someone who had done nothing but drag her friend down, and may be leading them to a bad end. You hear these stories, and you file them somewhere in your mind, not to resurface until you dive into a tale like The Paying Guests, and it all comes back. The warnings were there… but she deliberately went back… and why she wouldn’t listen… and on and on until the unfortunate circumstance can no longer be changed. It is for this reason that Water’s novels become thrillers, although they would not be categorized as such.

As I usually read reviews of books after I have finished them and have formed my own opinions, I was happy to learn that others agreed with my assessment.

“Brings to mind the dark and ominous atmosphere of Daphne Du Maurier’s Rebecca. . . . Waters’ skillful mastery of detail and atmosphere brings the suspenseful tale to life.”

“Waters is so confident – and, line by line, her writing so beautiful, precise and polished – that she sweeps all before her. . . . [I was] helplessly pulled along by the magnetic storytelling. Twice in the last few pages I shouted aloud – though whether in joy or horror I will not tell you. Sarah Waters skilfully keeps you guessing to the end.”

—Tracy Chevalier, in The Guardian

“Waters’s page-turning prose conceals great subtlety. Acutely sensitive to social nuance, she keeps us constantly alert to the pain and passion churning under the “false, bright” surface of gentility. From a novelist who has been shortlisted for the Booker three times, this is a winner.”

The weather is delightful these days here at Windy Bay. Last Sunday, I lounged on our floating dock in a comfortable chair, getting up from time to time for a swim, and thought that I was actually in “beach read” mode. Reading hour after hour, on a beautiful afternoon, with no thoughts of putting the book down until I reached the end, is my idea of heaven. If it were a rainy afternoon, I would have had the kettle on and be every bit as deliriously happy. A good story teller will have that effect.

According to James Scott Bell, in his book entitled, “Plot and Structure,” the power inherent in describing the world in which your characters inhabit is paramount. He uses this example from Dennis Lehane’s “Mystic River.”

“After work that night Jimmy Marcus had a beer with his brother-in-law, Kevin Savage, at the Warren Tap, the two of them sitting at the window and watching some kids play hockey. There were six kids and they were fighting in the dark, their faces gone featureless with it. The Warren Tap was tucked away on a side street in the old stockyard district.”

In a few short sentences, we know exactly where we are; we can picture it. No back story is necessary here.

A character does not exist outside of a culture. If you describe a traveler, you must identify, not only where they came from, but also the strange new world in which they find themselves. If you are writing about a period in history, the clothes, the method of transportation, or the way the enter a building, will give necessary clues.

Taken to fiction, it means the place and culture of which you are the most familiar, your first home, must now be examined with a new eye. In order to understand the essence of a place, the best way to grasp its meaning can be found in peeling back the layers of civilization. Who was there first? Who was driven out and by whom? Who fought for this land? Who won and who lost? Is a suburb built on what was once farmland and if so, what remnants of that rural community still exist? Is there an Inn that was once a Blacksmith’s Forge, or a Mill? It may still be the focal point of the region.

I used to describe the neighborhood of my youth as a typical, Leave it to Beaver suburb in the west end of Toronto. That may have sufficed for conversation, but in order to create the setting for a novel, it had to be fleshed out more fully and put through the writer’s lens.

We lived on the banks of a river called the Humber. In 1615, the explorer Etienne Brule, traveling with Champlain, became the first European to enter the happy hunting grounds that once were home to the Seneca tribe. A plaque outside an old mill, now converted to a restaurant, and Inn, commemorates this event. As a child, it would give me chills to think about it. 1615! What was our world like then?

More research led me to new discoveries about my former home. The Seneca tribe inhabited those shores for over five thousand years. Then in the 1920’s, a development company bought a vast track of land and created a neighborhood with a theme. Anglia pars, anglia procal. A little bit of England, far from England. They set out to duplicate a setting reminiscent of a fine borough in London. Winding streets, stone houses, leaded paned windows, oh we looked English all right. Did we in any way take on this sensibility? We did indeed, until more groups came and great diversity toppled this little enclave. The buildings remain, remarkably and beautifully preserved; now the inhabitants are different. Nothing stays exactly the same, yet the character of the place is unchanged, immovable and stalwart. As a writer, a place can be the fabric from which we cut the cloth of our characters. The style of the setting, sets the tone, and puts the characters on their initial footing.

Where do they go from there? Do they want to stay, or are they desperate to get out? If they do want to remain, will they be able to ride all the changes in store? Very few of us in modern times live in the places we inhabited in our youth. Given this, the coating of nostalgia can be draped over the past, and we can look at it from a distance and through rose colored glasses. If home is where the heart is, does the allegiance we feel for our first home remain with us forever, or do we shed it as a reptile leaves it skin? If so, do we not still see the outline of the former inhabitant if we happen upon that skin?

While I am not sure who said it first, the old adage of write what you know is apt. If your character is set in a place entirely foreign, then read as much as you can of its history. If writing fantasy, a place still needs its nouns. It needs something indigenous. It must have its rocks and trees.

” Home is a name, a word, it is a strong one; stronger than magician ever spoke, or spirit ever answered to, in the strongest conjuration.” Charles Dickens