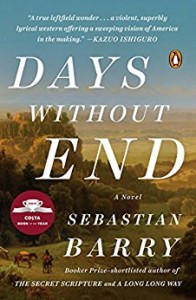 Sebastian Barry’s Days Without End, short-listed for the Man Booker Prize, is a rare treasure. According to the book jacket, Barry has won the Costa Book Award, the Hughes and Hughes Irish Novel of the Year Award, and the Walter Scott Prize.

Because I adored his previous novel, The Secret Scripture, I knew I would be in the hands of a master storyteller when I picked up this book. Yet I was surprised and delighted from the first page to realize I was in the hands, not only of a great writer but in one of those rare instances where you know as soon as the character’s voice begins to ring in your ear, that he spoke to the author the same way. Thomas McNulty, an escapee of the great famine, signs up in the 1850’s for the U.S. Army. History will always bear out that Ireland was the greatest national nursery for soldiers, according to the British at least, and then the United States. Right off the boat they were given their marching orders, went off where they were told and made friends with their comrades in arms along the way. It is the friendship between Thomas and the handsome John Cole that moves the story from Wyoming to Tennessee. They face the horrors of war in many different phases and guises, yet they manage to form a bond, an unconventional family unit, but a family nevertheless. It gives the story its anchor and the touching desire to be true to that family, their adopted Sioux daughter that makes the reader feel as if they are crisscrossing time and distance. Lyrical is the term most used to describe this beautiful writing. I would add magical with a slight cringe because I never use that word to describe writing, but in this case, I am forced to make an exception. There is a story that exists that needs to be found, there are characters that sometimes show up and start talking, but if between those two elements another chimerical world emerges, even in all the gore of war, then you have created something that stands apart from everything. It is a book that you do not want to end and must do something to overcome the accompanying sadness at having to put it down. It is a book you may not read too quickly because you know you will feel this way at the end. It is a book you keep on your coffee table or nightstand because you cannot even bear to add it to your groaning shelves, just yet. Barry may even inspire you to look him up so you may learn more about him. If he had a fan club, I would join it. I’ve listened to him read from Days Without End more than once. It is a book for your Christmas list, and one already purchased and sent on to a friend.

“Big train blowing steam and smoke at the depot. It’s like a creature. Something in perpetual explosion. Huge long muscle body on her and four big men punching coal into her boiler. It’s a sight. It’s going to be dragging four carriages east and the say they’ll do good. The light pall of snow hisses on the boiler sheets. Wish I could report well of the third-class wagon but it’s evil cold and damp and me and Winona got to sit in close as cats. Not an inch to move because our fellow passengers thought to bring their whole possessions with them. We even got goats and the mark of goats is stink.”

This is the voice of Thomas who would be on a list if I had ever comprised such a thing, as an all time great character, one I will never forget and one whom I think I know.

Life is very quiet these days at Windy Bay. September on Lake Coeur d’ Alene is often a busy time with boats being pulled from the water, docks going out, and getting the garden ready for winter. The summer people are mostly gone now, and I suppose some would fear a lonely winter ahead. As long as I have a list of books to read, I embrace the season. Although there are more choices to read,  as far as  the challenge of the short-listed books for the Man Booker Prize is concerned, my vote is cast. The quality and variety of available works is staggering and my hat goes off to everyone who has had the temerity and talent to get this far. Some are in a world apart though, and that is where I would put this master Irish story-teller. 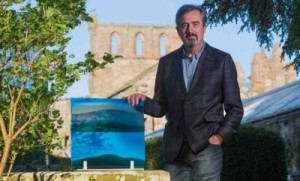 You may listen to him read here:  https://www.theguardian.com/books/audio/2017/feb/03/sebastian-barry-on-his-costa-winning-novel-days-without-end-books-podcast