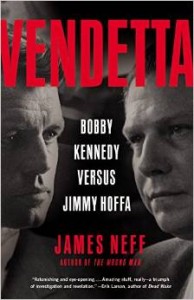 As the smoke filled Windy Bay on Lake Coeur d’ Alene this week, allergies, the likes of which I have not yet experienced, came along with it. It soon became clear that going outside made the condition about a thousand times worse, and that my best bet was to stay indoors with the doors shut. Along with the continuing work on my novel in progress, I sought escape in the pages of Vendetta: Bobby Kennedy Versus Jimmy Hoffa, by James Neff. While fiction fills most of my days, I switch to non-fiction often. I am drawn to history and the history of the sixties and seventies, has always been of particular fascination. For one thing, the period is dramatic, and for another, I have been intrigued by the players.

Going back to why Vendetta became the recipient of my one-click shopping on Amazon, I liked the idea that it was written by the Pulitzer Prize winning investigations editor of the Seattle Times. Reading the reviews, I was struck by the fact that Neff chose to give a balanced approach to the subject. Never in a million years did I imagine I would have one scintilla of empathy for Jimmy Hoffa. My knowledge of him was somewhat limited, and I thought of him as a thug who harassed the Kennedy home at Hickory Hill by having his teamsters drive by the house at all hours.

Robert F. Kennedy, on the other hand, always had my affection and admiration. Having read his own words, as well as the accounts of others, I never accepted the negative adjectives applied to him. Authors have sometimes launched into the tales of the good Bobby, or the bad Bobby, but Neff resisted that trap. Who among us could not be described in those terms? Robert Kennedy and His Times, by Arthur Schlesinger, Robert Kennedy: His Life by Evan Thomas, and Robert Kennedy in His Own Words: The Unpublished Recollections of the Kennedy Years, and last, but certainly not least, Thirteen Days, by Robert F. Kennedy, are among my personal favorites. Vendetta is written with careful attention to detail, and an absolutely thorough look at the motives that drove both men. So reading of Hoffa’s tough upbringing, his ability to connect with people, and his drive to pull himself and his family up by the bootstraps, humanizes him. Seeing the full weight of the Justice Department, absolutely determined to get him, made me cringe a little. On the other hand, his heavy hand was patently evident, and I, too, thought justice would be in order. Reading this book, reminded me of a boxing match with Kennedy in one corner and Hoffa in another. 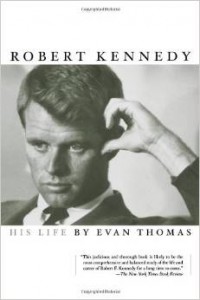 It is almost incomprehensible to me to learn that J. Edgar Hoover had an almost hands off approach to organized crime. He was interested in pursuing communists, and the mafia, in retrospect, looked back those times as golden. Picturing the characters swirling around the courtrooms and halls of F.B.I headquarters, I felt I could almost smell the cigarette smoke, and that the picture in my mind seemed black and white. Yet the reader knows the clock is ticking. Time waits for no man. Suddenly it is November in 1963, and we all know what happens next. We know that Hoover will deliver the news to R.F.K. in a chilling and entirely dispassionate tone. President Kennedy once said that in politics one does not have friends, just allies. 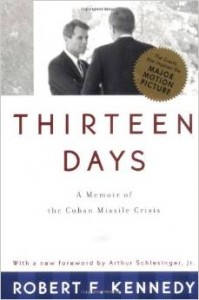 We are so inundated by tales of good guys and bad guys that a balanced account is almost foreign. We live in a time where the news of the day is so unbalanced that as a nation, we are living in dueling realities. Therefore, Neff is to be admired for his account of a man of privilege setting out to do some good in this old world against a guy who wanted more out of life than the world he saw around him.

The review that sold me on this book came from Erik Larson:

“From the violence of its gripping opening to the sorrow of its close, this is an astonishing and eye-opening account of the vendetta- obsessive, intigue-filled, hatred-tinged-that pitted Robert F. Kennedy against Teamsters boss Jimmy Hoffa, and nearly consumed them both. Amazing stuff, really-a triumph of investigation and revelation.”